Difference between revisions of "The Eye and Retina" 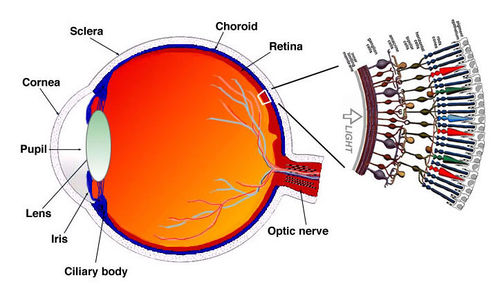 A drawing of a section through the human eye with a schematic enlargement of the retina. [1]

The retina is a light-sensitive layer of tissue that lines the rear surface of the eye. Light from one's visual field passes through the eye and projects onto the retina to create an image. Subsequently, retinal neurons detect this image, which initiates a cascade of biochemical and electrical processing that is sent through the optic nerve and eventually to the visual cortex of the brain. These biochemical and electrical signals provide the basis for vision.

Aperture that allows the light to enter the eye

Second refractive surface that light goes through on its way to the retina tidbit: no blood supply to the lens medical: cataracts, presbyopia

Clear, watery fluid that supplies nutrients to the structures it surrounds. Movement of aqueous humor is from posterior chamber to anterior chamber through the pupil. Drainage out of the anterior chamber via canal of Schlemm and trabecular meshwork into venous system. The equilibrium maintains appropriate intra-ocular pressure. medical: glaucoma (open and close angle)

thick, gel-like fluid that maintains the shape of the eye 80% of the volume of the eye medical: floaters, retinal detachment Three layers of the eye sphere (outside to inside)

Extraocular muscles of the eye

Anatomy of the human retina

A diagram showing the locations of the Optic cube and disc, Macula, Fovea, veins, and arteries. [1]

Funduscopic examination of the retina

10 histological layers of the retina

http://www.retinalmicroscopy.com/species.html http://www.retinalmicroscopy.com/movies.html Retinal pigment epithelium
Single layer of hexagonal cells
Located between the choroid and the photoreceptor layer
Forms a blood-retina barrier with tight junctions with the choroid
It is not firmly attached to the the neural aspect of the retina (photoreceptor layer)
medical: a potential site of retinal detachment
Photoreceptor layer
Composed of rods and cones
Outer limiting “membrane”
Site of connection between photoreceptors and Müller cells
Outer nuclear layer
Nuclei of photoreceptor cells
Outer plexiform layer
Photoreceptor fibers
Bipolar cell dendrites
“Two important synaptic interactions that occur at the outer plexiform layer are: the splitting of the visual signal into two separate channels of information flow, one for detecting objects lighter than background and one for detecting objects darker that background the instillation of pathways to create simultaneous contrast of visual objects In the first synaptic interactions, the channels of information flow are known as the basis of successive contrast, or ON and OFF pathways, respectively, whereas the second interaction puts light and dark boundaries in simultaneous contrast and forms a receptive field structure, with a center contrasted to an inhibitory surround.”
Inner nuclear layer
Bipolar cell nuclei
Horizontal cells
Amacrine cells
Interplexiform cells
Muller cells
Inner plexiform layer
Presynaptic dendrites of bipolar cells (axons)
Postsynaptic dendrites of ganglion cells
Amacrine cell dendrites
Ganglion cell layer
Nerve fiber layer
Axons of Ganglion cells
Inner limiting “membrane”
Ends of Muller cells

Cells of the retina

Cells of the Retina

http://www.retinalmicroscopy.com/horizontal.html
located between OPL and INL
3 types on human retina (HI, HII, HIII)
dendrites contact synaptic terminals of photoreceptor cells and with the dendrites of bipolar cells, which they inhibit

http://www.retinalmicroscopy.com/amacrine.html
located between INL and IPL
all dendrites emerge from same side of the cell to branch out and terminate in synaptic complexes between bipolar, ganglion, etc cells
thought to lack axons.
some morphologies might have axons but do not leave retina
Interplexiform cells
post-synaptic to amacrine cells and pre-synaptic to horizontal and bipolar cells
feedback loop

cells of Müller - principal glial cells of the retina
http://www.retinalmicroscopy.com/glial.html
extend through the whole thickness of the retina
Provide architectual support
supporting role and other functions (communications?)
Astroglia
Microglia