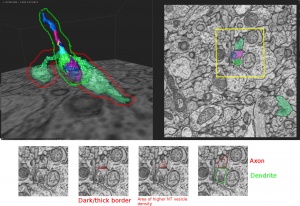 The axon is circled red and the dendrite circled green. The yellow square roughly indicates the borders of the cropped images in the bottom row. Each of those images is the same image with different annotations drawn on them (except for the first, which allows you to see the original greyscale micrograph with no obstructing highlights/markings). The bottom row of images, from left to right, show:

Many more examples will appear here over time.