Usually Eyewire play goes smoothly, but sometimes players come up against tricky cells that may be cause confusion.

Mergers are the most common problem in Eyewire. These are segments that the AI has fused two segments together that don't belong. There is no way for the player to separate these segments, so they must learn to work around them. For small mergers that do not exit the cube a player may ignore them and continue their trace as normal. For larger mergers and/or mergers the exit the cube, the player may leave out the segment with the merger and continue their trace as normal. In special cases, the segment with the merger may also exit the cube. In these cases the player should add some "dust" that exits the cube in the same spot as the branch with the merger so that the branch will continue to grow.

Sometimes the 2D image slides may contain misalignments. This may cause a "jump" between the misaligned segments. In these cases the player should do their best to look for shape and direction consistency to grow out his or her branch. 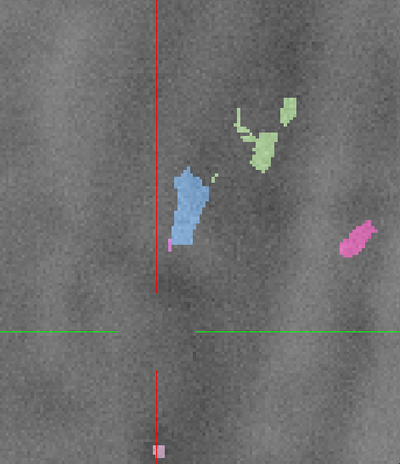 It is important that players utilize multiple visual cues to check their work before they submit. Sometimes pieces look like they fit in the 2D, but clearly do not work in the 3D model. If unclear borders in the 2D plane are causing a player confusion, he or she may also use the command ALT+drag to drag the 2D to a different view.

Segment appears valid in 2D, but in 3D it is clear it doesn't fit
Retrieved from "https://wiki.eyewire.org/index.php?title=Overcoming_Obstacles&oldid=2045"