File:Recepfield2.jpg
A strip of light being oriented at different angles on the receptive field of a horizontally selective OSGC. 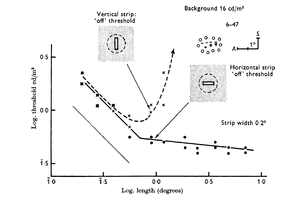 The length of the strip of light was shortened to determine the effect it would have on the hyperpolarization. 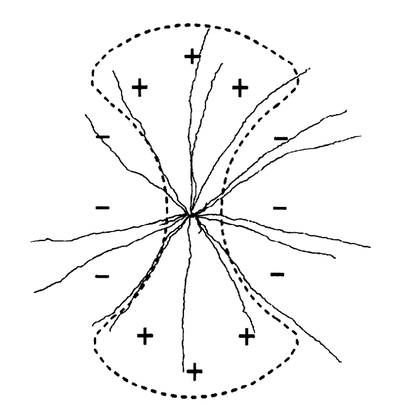 The receptive field of an orientation selective ganglion cell, with an excitatory center (+) and inhibitory surround (-).

The neurotransmitter glycine is found in very small concentrations in ganglion cells (Marc,2002).

In this study they found that the excitatory regions of the receptive field were difficult to find (Levick, 1967).

It is thought that amacrine cells help form the orientation selectivity of OSGCs, however, the exact role of amacrine cells still remains unclear (Bloomfield, 1994). Many questions remain on how the synaptic mechanisms create orientation selectivity in ganglion cells (Marc, 2002). A complete description of all the different types of ganglion cell types has yet to be formed and further research is needed for this to be accomplished (Marc, 2002).