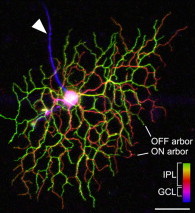 Cells will be available for tracing in Eyewire, although these cells are not currently available (March 2012). See http://wiki.eyewire.org/wiki/E2198

D. I. Vaney, B. Sivyer, and W. R. Taylor, Direction selectivity in the retina: symmetry and asymmetry in structure and function, Nature Reviews Neuroscience, vol. 13, no. 3, pp. 194-208, Jan. 2012. File:Direction Selectivity in the Retina.pdf