Difference between revisions of "Neuron"

Neurons are a type of cell. They work together to make up the nervous sytem, which consists of the brain, spinal column, and nerves. Neurons generate and send electrical and chemical signals within the brain and throughout the rest of the body. Neurons send many types of signals, pain signals when you place a finger on a hot stove, and ones that let you read and understand this article; these signals allow us to think about and feel the world around us. While neurons are the building blocks of the nervous system, it is not sufficient to study single cells alone. It is the coordinated operation of billions of neurons that control the thoughts, feelings, and perceptions of a living organism.

An important step to craking the mysteries of humanity is to understand the brain. The brain is the control center of the nervous system, the place where our thoughts are generated and where signals from the rest of the body are sent for processing. In order to understand the brain, we must go beyond the surface and focus on the work of individual neurons and the connections between them. Looking at the brain as a sum of many small parts rather than one whole will lead us to a much greater understanding of the fascinating organ.

This reductionist goal is finally becoming realistic, due to many exciting technological advances. Eyewire is one of them. By playing an absorbing and relaxing game of coloring brain images, you can help map the connections of a neural network. No specialized knowledge of neuroscience is required; you need only be curious, intelligent, and observant. Your input will help scientists understand how the retina functions. It will also be used by engineers to improve the underlying computational technology, eventually making it powerful enough to detect “miswirings” of the brain that are hypothesized to underlie disorders like autism and schizophrenia.

Outer space has been called the “final frontier,” the terminal goal in our search for universal knowledge. Yet we can more easily perceive the stars at the farthest reaches of our galaxy than what lies inside own skulls. The brain is one of the most perplexing and puzzling problems left in science. 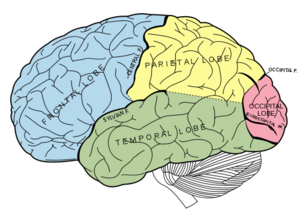 Since the 19th century, neuroscientists have divided the brain into regions, each of which are specialized for distinct mental functions. The occipital cortex is important for vision, and the upper part of the temporal cortex is involved in hearing.

The regional model has been useful for understanding the symptoms of brain injury. For example, impairment of language after a stroke generally involves damage to certain regions on the left side of the brain. However, the regional model has also failed to answer many questions. What, for instance, is different about the brain of a person with autism or schizophrenia? So far, researchers have failed to identify a clear and consistent abnormality associated with either of these disorders.

Today many are optimistic that success will come through more refined investigation at the neuronal level. The numbers are daunting, though, as the brain contains an estimated 100 billion neurons, which far outnumber the tens or hundreds of regions. We know that electrical and chemical signals pass within and between neurons. There is ample evidence that these signals represent the functioning of our minds, yet we understand little of this functioning.

Our ignorance is not limited to brain disorders. Researchers are still struggling to understand how the neurons of a normal brain work together when we perceive, think, and feel. Studies of the neural basis of perception, and in particular vision, have long been central to basic research in neuroscience. Eyewire follows in this tradition, and focuses on neurons in the retina, which contains the neurons involved in the first steps of seeing.

The parts of a neuron

The brain is made up of two kinds of cells: neurons and glia. You can think of neurons as the cast of the show that we call the mind. Glia are like the crew — they provide support, nurishment, and protection for the neurons. Without them the show could not go on, but their activities are not the show itself. A typical neuron has three main parts: the soma, the axon, and the dendrites. The soma is also called the “cell body,” and contains the nucleus and DNA. The axon is a long branch that typicaly carries signals away from the soma to other neurons. Dendrites are shorter branches that carry signals from other neurons to the soma. The electrical signals in the axon are short pulses called action potentials, or “spikes” for short.

The inner workings of individual neurons are fascinating by themselves, but the story gets much more complex when we look at the connections between neurons. When the axon of one neuron comes into contact with a dendrite of another, the two can communicate through a special junction called a synapse. The axon sends information to other neurons by releasing molecules known as neurotransmitters. Dendrites receive signals from other neurons by sensing neurotransmitter molecules. (Direct transmission of electrical signals between neurons can also occur.) A typical neuron is connected to thousands of other neurons! Together these cells form a highly interconnected network.

To study a network of neurons it would be helpful to have a map of the network’s connections. Such mapping has been difficult or impossible in the past, but is becoming more feasible due to technological advances. One technology is known as serial electron microscopy, which involves cutting extremely thin slices of brain tissue using a diamond blade, acquiring a sequence of two dimensional images, and assembling them into a three dimensional image of every neuron and synapse in the tissue.

Serial electron microscopy (EM) was the method used to map every neural connection in the tiny roundworm C. elegans. 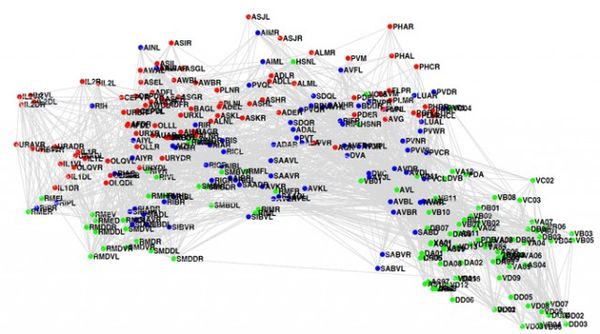 Each node in this map has a four letter code, and corresponds to one of the worm’s 300 neurons. Each line between nodes represents a connection between neurons. Such a map was originally called a “wiring diagram,” drawing an analogy between the nervous system and an electronic device. Today we call it a connectome. It took over a dozen years of laborious effort in the 1970s and 80s to find this map.

A new version of serial EM, known as serial block face scanning electron microscopy, has sped up the acquisition of images. However, the analysis of these images to find connectomes is still extremely time-consuming. To some extent, image analysis can be automated through the use of artificial intelligence (AI), but computers still make mistakes and cannot do the job alone. Eyewire enables people like you to cooperate with AI to find connectomes.

To learn more about the emerging field of connectomics, check out this TED Talk or read the new book CONNECTOME.