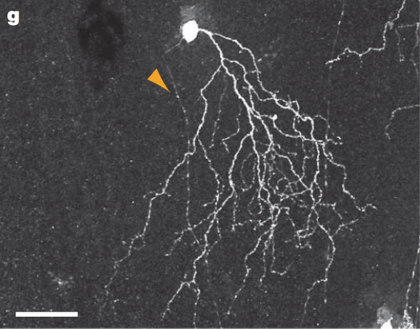 JAM-B cells share many functional and structural traits in addition to the presence of the JAM-B molecular biomarker. For example, most J-RGCs have asymmetric dendritic arbors aligned in a dorsal-to-ventral direction across the retina. Those J-RGCs with markedly asymmetric dendritic arbors also have asymmetric receptive fields. In addition, J-RGCs are direction-selective, responding specifically to upward motion. Furthermore, they are all OFF RGCs, meaning they respond to a decrease of light in the receptive field center, or to the trailing rather than the leading edge of a moving bright stimulus.[1] 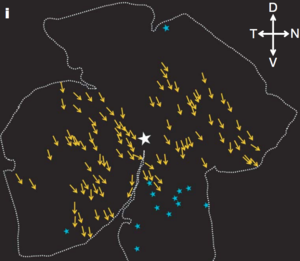 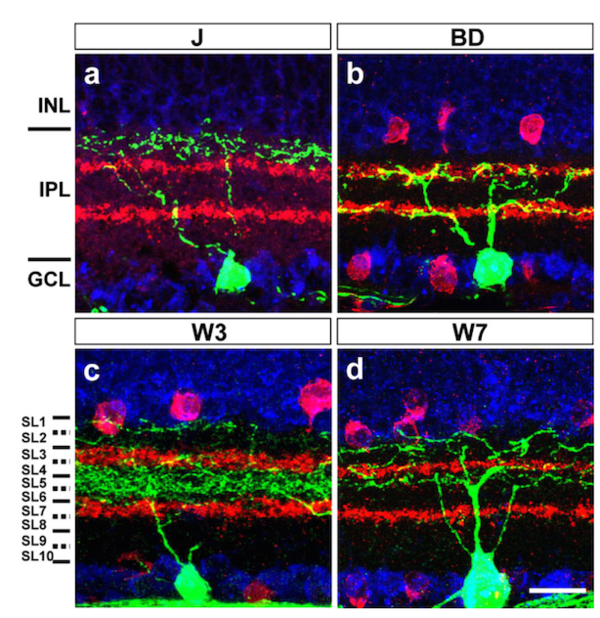 Furthermore, the receptive field of J-RGCs is unusual in that the integrated strength of its ON surround exceeds that of the OFF centre. Kim et al. reached this conclusion after recording the response of J-RGCs to different sizes of flashing light spots centered at the soma. When the flashing spot was of a certain large enough size, the J-RGC sometimes failed to respond. Upon increasing the size of flashing spot even further, Kim et al. found that the J-RGCs tended to respond at light onset. Thus the strength of the JAM-B cells' ON surround exceeds that of their OFF center--an unusual feature in a retinal ganglion cell. 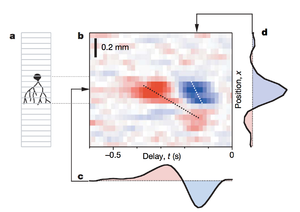 Before the discovery of JAM-B cells, retinal ganglion cells lacked a labeling system based on molecular markers. Thus Retinal Ganglion Cells were categorized by nonselective factors or else treated as a single population. Thus RGCs were often either subject to subjective classification or inaccurate overgeneralization[1]. Today, RGC subtypes in addition to JAM-B cells have been classified based on reporter genes. These subtypes include BD-, W3-, and W7-RGCs. These subsets can be identified using transgenic lines to mark them.

The collicular termination of J-RGCs (of which JAM-B cells are a majority) is intriguing in light of a study in which Dra"ger and Hubel mapped the receptive fields of neurons in the superior colliculus of the mouse. Nearly all of the direction-selective neurons they studied (35 out of 38) preferred upward motion in the visual field. This preference corresponds to that of J-RGCs [1]. Kim et al. have proposed that the receptive fields of direction-selective collicular cells are built from J-RGCs. Research remains to be done on this topic.

It is uncertain why the mouse seems to have invested so heavily in sensitivity to upward motion. KIm et al. have suggested mating JAM-B–CreER mice to other transgenics bearing appropriate Cre-activated channels or toxins. Thus it could be possible to inactivate the pathway and thereby directly test its function[1].