Rods and cones, the two traditional photoreceptors in the retina that allow us to see, were long considered to be the only cells in the mammalian eye that possessed direct photosensitivity. However, a novel type of photoreceptor that differs greatly from these two in both form and function was discovered just over a decade ago. These cells express the photopigment melanopsin (as opposed to rhodopsin of rods and cone opsins of cones). Interestingly, these cells are retinal ganglion cells (RGCs), allowing them to have direct communication with visually sensitive areas of the brain. Intrinsically photosensitive retinal ganglion cells (ipRGCs) encode ambient light levels (irradiance) rather than image-related information, and are best known for their roles in synchronizing circadian rhythms with night and day, and light-mediated pupil constriction. They provide input not only to circadian and pupillary centers, but also to a number of other retinorecipient regions of the brain. Making up <5% of the total number of RGCs in the reitna, ipRGCs are a remarkably rare subpopulation of RGCs. Through immunocytochemistry experiments, the number of ipRGCs per retina have been estimated to be between 500 to 2400 (Berson et al., 2010). Although they were initially thought to be composed of only one type, recent morphological and functional studies indicate that there are in fact several distinct subtypes of ipRGCs, termed M1 through M5. 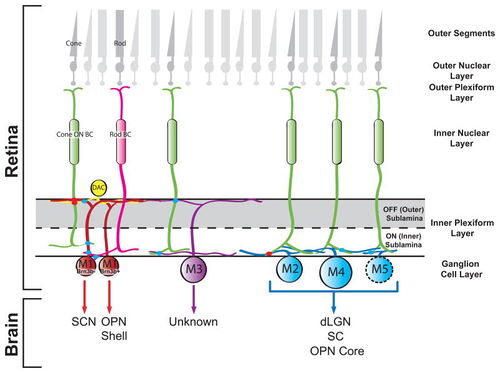 ipRGCs are characterized by their smaller soma size and large dendritic fields. M1 ipRGCs have been most extensively studied, with sparsely branching dendrites that stratify in the OFF sublamina of the IPL. Among M1s, there are some that have cell bodes in the INL, termed displaced M1s. M2 cells have slightly larger cell bodies than M1s and their dendrites reside in the ON sublamina of the IPL. M3 cells are bistratified, extending their dendrites to both ON and OFF sublaminas. M4 cells are monostratified in the ON sublamina and have the largest somas out of ipRGCs; they are more highly branched and have larger dendritic fields than M1-M3 (Ecker et al., 2010, Estevez et al., 2012). The M5 subtype is highly branched with a small dendritic field, and stratifies in the ON IPL (Ecker et al., 2010, Estevez et al., 2012). 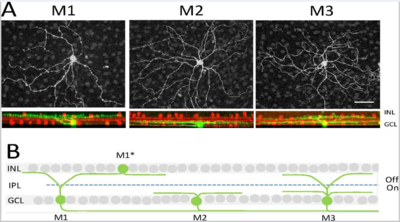 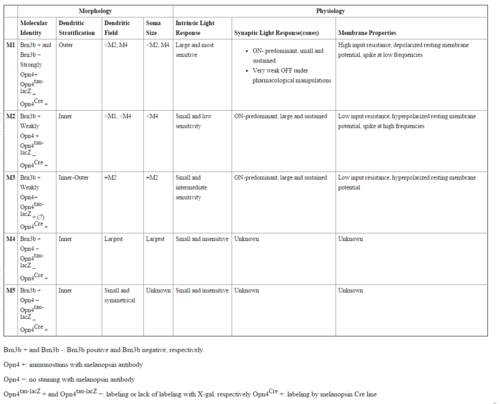 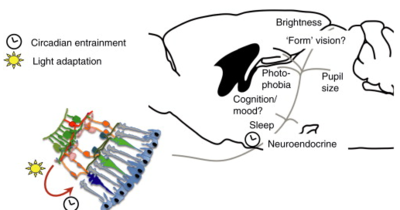