From Eyewire
Revision as of 09:46, 30 July 2015 by Nseraf (Talk | contribs) (Created page with "Horizontal cells are the laterally interconnecting neurons having cell bodies in the inner nuclear layer of the retina of vertebrate eyes. They help integrate and regulate the...")
(diff) ← Older revision | Latest revision (diff) | Newer revision → (diff)
Jump to: navigation, search

Horizontal cells are the laterally interconnecting neurons having cell bodies in the inner nuclear layer of the retina of vertebrate eyes. They help integrate and regulate the input from multiple photoreceptor cells. Among their functions, horizontal cells are responsible for allowing eyes to adjust to see well under both bright and dim light conditions. Horizontal cells are inhibitory interneurons that release GABA upon depolarization

There are three basic types of horizontal cells, designated HI, HII and HIII. The selectivity of these three horizontal cells, towards one of the three cone types, is a matter of debate. According to studies conducted by Boycott and Wassle neither HI cells nor HII cells were selective towards S,M, or L cones. By contrast, Anhelt and Kolb claim that in their observations HI cells connected to all three cone types indiscriminately, however, HII cells tended to contact S cones the most. They also identified a third type of horizontal cell, HIII, which was identical to HI but did not make contact with S cones.

The HII cells also make connections with rods, but do so far enough away from the horizontal cell's soma such that they do not interfere with the activities of the cones. 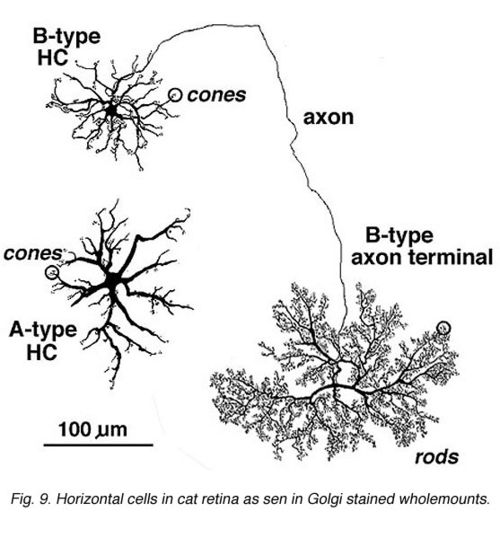 Horizontal cells and other retinal interneuron cells are less likely to be near neighbours of the same subtype than would occur by chance, resulting in ‘exclusion zones’ that separate them. Mosaic arrangements provide a mechanism to distribute each cell type evenly across the retina, ensuring that all parts of the visual field have access to a full set of processing elements.[3] MEGF10 and MEGF11 transmembrane proteins have critical roles in the formation of the mosaics by horizontal cells and starburst amacrine cells in mice.[4]

P_o is activated and therefore hyperpolarizes P_o reduce their release of glutamate The reduction of glutamate hyperpolarizes the horizontal cell The horizontal cell reduces its release of GABA The reduction of GABA generally promotes the depolarization of adjacent photoreceptors However, because P_o are illuminated they are strongly hyperpolarized by phototransduction - therefore a reduction in GABA is insufficient to make P_o depolarise But, because P_m is already in darkness, the reduction in GABA levels is effective at causing P_m to depolarise P_m releases glutamate H Bipolar cell is depolarized To explain diffuse light, then we consider both cases together, and as it turns out, the two effects cancel each other out, and we get little or no net effect.