File:Ganglion.png
Two different views (side and bottom) of a type of retinal ganglion cell called W3.

Ganglion cells extract features of the visual world, encode them in frequency modulated spike trains, and send them coursing along optic nerve axons to various visual brain centers. The first step in this process is the binding of amacrine and bipolar cell neurotransmitters onto specialized receptor proteins embedded in ganglion cell dendritic membrane. These receptor molecules are concentrated at sites of synapses with amacrine and bipolar cells. Once the neurotransmitter is bound, ion selective channels, a kind of micropore in the subsynaptic membrane, open. Charged ionic species rush through these channels, driven by electrochemical gradients. As a consequence current flows into the cell altering membrane potential. These synaptic currents, through a complex interplay of dendritic structure and other potential sensitive ion channels (Fohlmeister and Miller, 1997), alter ganglion cell firing rates, and convey visual signals to the brain. 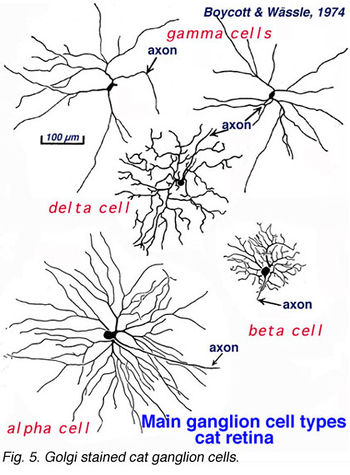