Feedforward backpropagation is an error-driven learning technique popularized in 1986 by David Rumelhart (1942-2011), an American psychologist, Geoffrey Hinton (1947-), a British informatician, and Ronald Williams, an American professor of computer science.[1] It is a supervised learning technique, meaning that the desired outputs are known beforehand, and the task of the network is to learn to generate the desired outputs from the inputs.

Model of a neuron. j is the index of the neuron when there is more than one neuron. The activation function for feedforward backpropagation is sigmoidal.
File:Artificial neural network.svg
Feedforward network.

Given a set of k-dimensional inputs with values between 0 and 1 represented as a column vector:

and a nonlinear neuron with (initially random, uniformly distributed between -1 and 1) synaptic weights from the inputs:

then the output of the neuron is defined as follows:

This function has the useful property that

output neurons, and the weights from inputs to hidden neurons are 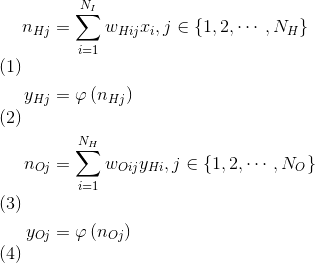 If the desired outputs for a given input vector are

, then the update rules for the weights are as follows: 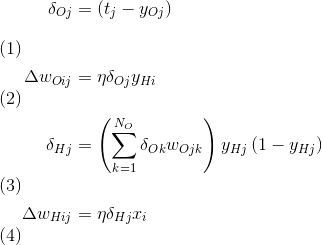 where η is some small learning rate,

is an error term for output neuron j and

is a backpropagated error term for hidden neuron j.

The lower the cross entropy, the more accurately the network represents what needs to be learned.

Next, we determine how the error changes based on changes to an individual weight from hidden neuron to output neuron: 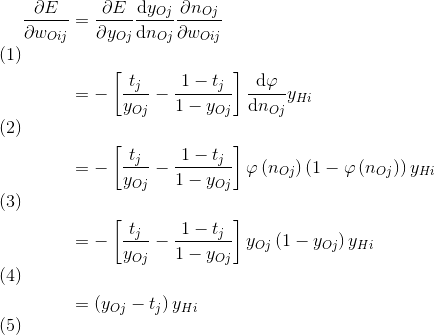 We then want to change

slightly in the direction which reduces E, that is,

. This is called gradient descent.

We do the same thing to find the update rule for the weights between input and hidden neurons: 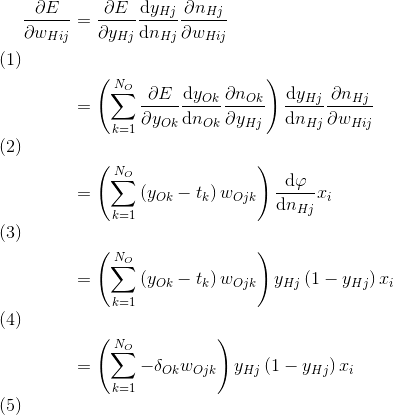 We then want to change

slightly in the direction which reduces E, that is, 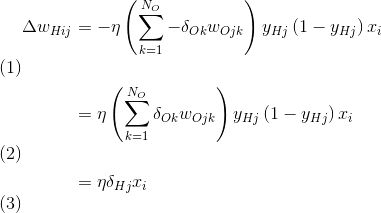 While mathematically sound, the feedforward backpropagation algorithm has been called biologically implausible due to its requirements for neural connections to communicate backwards.[2]