As opposed to a feedforward network, a recurrent network is allowed to have connections from any neuron to any neuron in any direction.

Model of a neuron. j is the index of the neuron when there is more than one neuron. The activation function for backpropagation is sigmoidal.
File:Artificial neural network.svg
A feedforward network. In the Almeida-Pineda model, connections may go from any neuron to any neuron, backwards or forwards.

Given a set of k-dimensional inputs with values between 0 and 1 represented as a column vector:

and a nonlinear neuron with (initially random, uniformly distributed between -1 and 1) synaptic weights from the inputs:

then the output y of the neuron is defined as follows:

is a sigmoidal function such as that used in ordinary feedforward backpropagation (we will use the logistic function from that page), and n is the net input of the neuron, calculated as follows. Assuming N neurons where k of the neurons are simple inputs to the network, with the weight of the connection from neuron i to neuron j being

of neuron j (where j is not an input neuron) is computed using a discrete time approximation to the following equation, iteratively applied to all neurons until the nets settle to some equilibrium state. Initially set

to 0 for all non-input neurons.

Note that if the weights between pairs of neurons are symmetric, that is,

, then the network is guaranteed to settle to an equilibrium state.[4] If symmetry is not held, the network will often settle.[5] Of course, if i is an input, then 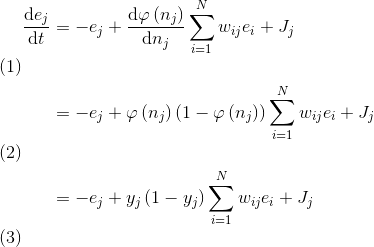 The weights are then updated according to the following equation:

where η is some small learning rate.

are considered estimates of

during the derivation of the equations for feedforward backpropagation: 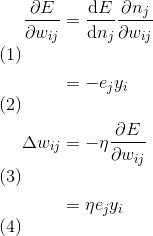 While mathematically sound, the Almeida-Pineda model is biologically implausible, like feedforward backpropagation, because the model requires that neurons communicate error terms backwards through connections for weight updates.